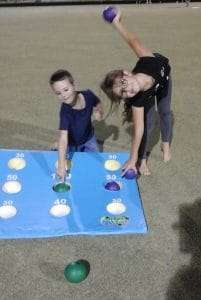 Season 2 of Jack Attack was won by High Strength captained by Harry Lewis, Garrath Baihn and Subhast Chand, all from Neilsens Concrete.  Runners-up were also from Neilsens Concrete consisting of Ian Roscoe, Craig Palmer and Liam Tong.  It was a great final with the result decided with an extra end.  Whilst the adults battled out the final Charli and Lincoln played Junior Jack Attack (under Brownies rules).

Watch this website for other Jack Attack activities happening later this year.