For 100 years Mother Nature has tested the Windsor Bowls Club with dramatic storms and devastating floods.  But we are still standing.

Nearly 10 years later in 1967 and again in 1972 the Greens and Clubhouse were flooded causing considerable damage. In 1967 the inside of the clubhouse was flooded to a height of 1200mm.

Much damage was done to the greens and much hard work had to be done by the greenkeeper and members to restore the greens back to good running order – particularly the Paul Maggs Green.  In these days the greens were couch grass and fortunately we had a nursery from which hundreds of plugs were taken to repair both greens.  Thanks to the assistance given by neighbouring clubs during this bad time the Club was were able to repair the greens and surrounds much quicker.

Heavy rains in January, 2011 resulted in another devastating flooding of the clubhouse and both greens.  Through great volunteer work, as had always been the case in the past, and with strong support from Brisbane City Council the club was cleaned up, sanitised, new carpet laid and all electrical wiring and fittings tested. 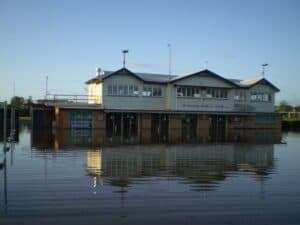 Brisbane is noted for its fierce storms and Windsor has faced its fair share of them.

A severe storm on 18 January 1985 smashed many of the windows at the rear of the clubhouse and caused extensive damage by rain and hail.

And a similar result occurred within the last decade with a severe storm with large hail battering the southern face of the Club.  With heaps of windows broken and rain pouring in, an undaunted set of volunteers kept mopping the water up on the 1st floor to minimise damage on the ground floor.

Looking at the wonderful Clubhouse and surrounds today you wouldn’t realise what we have been through.